GM’s Futurama at the Fair was probably the most spectacular pavilion. Albert Kahn was the architect with the design by Norman Bel Geddes and it took the hundreds of thousands who stepped inside on a journey into the future: to 1960. They sat in moving chairs (552 in all) with small speakers to hear the commentary, on a continuous track and moved forward for a third of a mile looking down on the landscape of tomorrow.  They all received a pin and the brochure below. 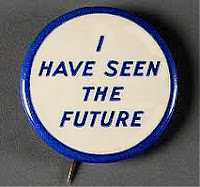 The pavilion was actually made up of four buildings and was large enough to have a real intersection filled with GM cars and trucks which the visitors looked down on from a first floor walkway. The moving tour was called Highways and Horizons and the Fair guide book said: ‘Covering an area of 35,738 square feet, the ‘futurama’ is the largest and most realistic scale-model ever constructed. As visitors in the moving chairs tour this ‘futurama’ they experience the sensation of traveling hundreds of miles and viewing the scenes from a low-flying airplane. As they travel on several levels of the building in their magic chairs, they view a continuous animated panorama of towns and cities, rivers and lakes, country and farm areas, industrial plants in operation, country clubs, forests, valleys and snow-capped mountains. The ‘futurama’ contains approximately 500,000 individually designed houses; more than a million trees of eighteen species; and 50,000scale-model automobiles, of which 10,000 are in actual operation over super-highways, speed lanes and multi-decked bridges’. 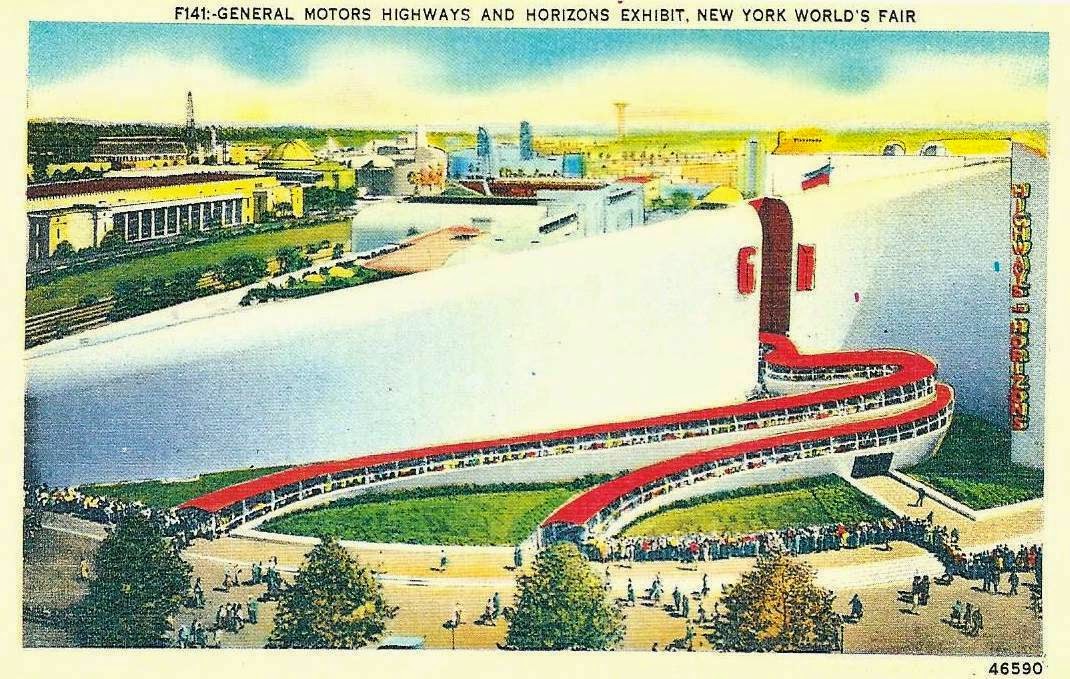 Photos of the huge Futurama were extensively used in Bel Geddes 1940 book Magic motorways.  He originally thought of creating the City of Tomorrow in 1937 for a Shell Oil ad campaign.  I've added some pages from the book which show the Futurama model. 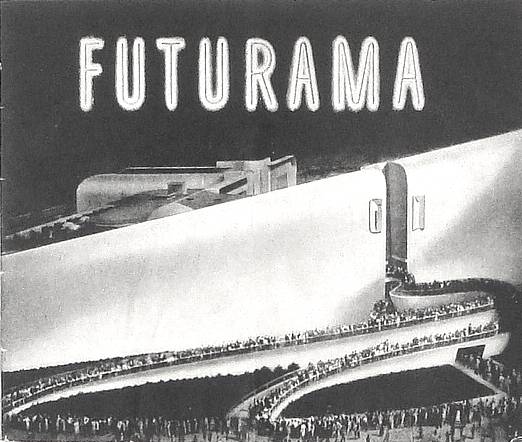 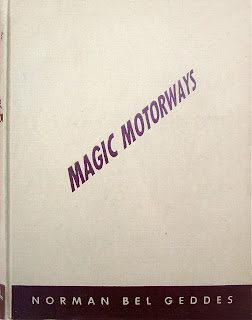 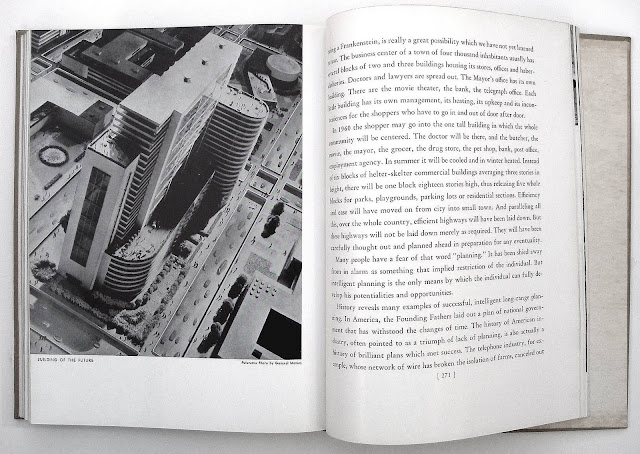 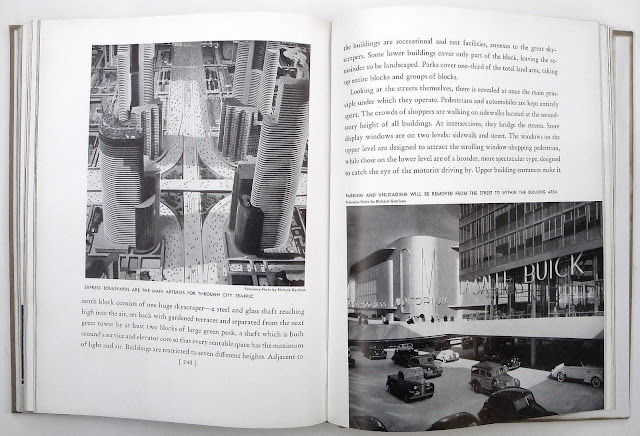 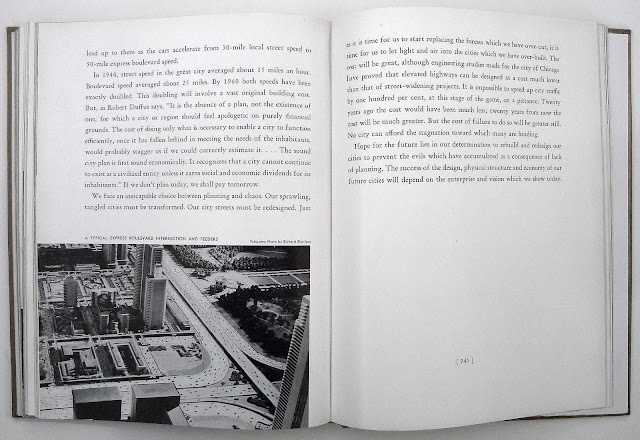 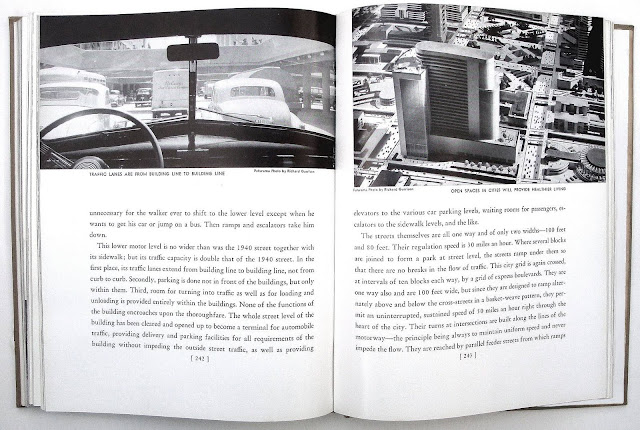 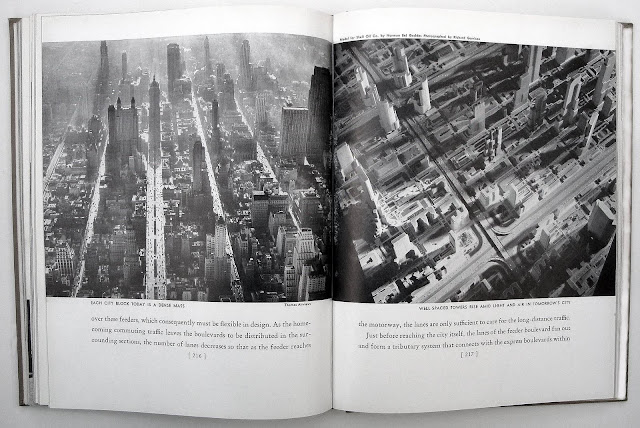 Posted by Robin at 8:09 AM No comments:
Email ThisBlogThis!Share to TwitterShare to FacebookShare to Pinterest 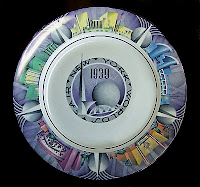 Donald Deskey’s superb design of this World Fair book must have made it one of the more worthwhile souvenirs amongst the of hundreds cheaply made commercial items. Perhaps the best souvenir of all was the plate (right) designed by Charles Murphy for the Homer Laughlin company, unfortunately I don't have one.
Deskey is probably better known as a furniture designer of the streamline era but his graphic work appeared in every household across the land because he designed the Tide soap box with the red, orange and yellow bulls eye and boxes for Oxydol and Cheer. The design for Crest toothpaste was also his.
The design of this book with 144 (unnumbered) pages still looks fresh today, seventy plus years after they were printed. Large photos and graphics, angled text and the clever use of ten short pages to introduce the various sections work really well and provide enough visual interest to keep turning the pages. I particularly liked these short intro pages that used spot color and cleverly designed to blend into the page underneath. Turning over the cover to reveal a bird’s eye view of the complete Fair with color on the left and mono on the right seems rather unusual design choice though. The only problem with this lovely book was the plastic ring-binding, I think it should have been a bit looser to make turning the pages easier. When I got my copy a few years back it was very brittle so I removed it.
There are a few worthwhile books about this amazing Fair. The best are The World of Tomorrow (ISBN 0060159235) and Trylon and Perisphere (ISBN 0810924153)

Posted by Robin at 7:54 AM No comments:
Email ThisBlogThis!Share to TwitterShare to FacebookShare to Pinterest
Newer Posts Older Posts Home
Subscribe to: Posts (Atom)