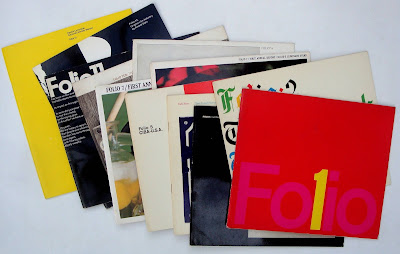 Sanders was a New York based printer founded in 1895 and these booklets were issued in the in the sixties to the early seventies (none were dated).
They were 7.75 by 9 inches and obviously printed by the company, the first nine had sixteen pages and from ten onwards it varied between twenty and forty pages.
Each featured a designer or design company and of the few I have the selection is very impressive.
Folio 7, designed by Gaynor & Ducas, was an Annual Report for David’s Lemonade Stand which spun off a very clever David’s Lemonade Stand Corporate Identity Manual for Folio 15, Folio 10 was devoted to Mo Lebowitz and his famous (least among designers) The Antique Press, Folio 11 had a handsome design by Herb Lubalin on how to become a successful Art Director.
Unfortunately I’ve only got eleven of these lovely printer promotions and the first three are shown below.  Folio 1 featured Chermayeff & Geismar design group; Folio 2 Louis Silverstein at the New York Times; Folio 3 Papert, Koenig, Lois ad agency.  Tom Geismar recently told me the first issue was designed in 1960 or '61.

Posted by Robin at 5:31 AM
Email ThisBlogThis!Share to TwitterShare to FacebookShare to Pinterest